âMASTERS OF MODERN DESIGN: THE ART OF THE JAPANESE AMERICAN EXPERIENCEâ DOCUMENTARY WINS LOS ANGELES AREA EMMY FOR THE ARTS 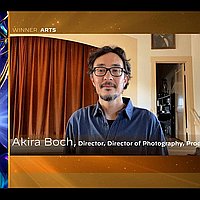 The Japanese American National Museum is pleased to announce that its documentary, Masters of Modern Design: The Art of the Japanese American Experience, was awarded the Los Angeles Area Emmy for the Arts in an online presentation on Saturday, July 18. The film was a co-production of KCET's Artbound series and JANMâs Watase Media Arts Center in 2019.

Masters of Modern Design focuses on five Japanese American artists and designers whose lives were impacted by the U.S. governmentâs unlawful forced removal and imprisonment of 120,000 persons of Japanese ancestry in concentration camps during World War II. Artists Isamu Noguchi and Ruth Asawa, art director S. Neil Fujita, furniture designer and woodworker George Nakashima and architect Gyo Obata were deeply affected by the incarceration and drew on their experiences to become influential leaders in their fields in the post-war era.

âIâm accepting this award on behalf of KCET, the Japanese American National Museum and everyone who contributed to this project,â stated Akira Boch, the filmâs director and head of the Watase Media Arts Center. âI want to thank all the participants who shared their incredible stories. I also want to dedicate this award to everyone who was unjustly incarcerated during World War II in Americaâs concentration camps. And everyone out there thatâs continuing the fight for justice and equality.â

All those featured in the documentary were held in one of the government-run camps, or their families were. While Noguchi was an internationally famous sculptor and designer, he volunteered to stay in one of the camps with hopes of redesigning the living environment. Asawa was influenced by art teachers in camp before attending Black Mountain College, where she developed her wired sculpture style.

Fujita worked as an art director of the camp newspaper in Heart Mountain, Wyoming and went on to design iconic jazz album covers and book covers that helped to define design in the twentieth century, including the famous Godfather logo. Nakashima learned woodworking skills in camp and became known for his highly-coveted hand-produced wood furniture. Obata enrolled in college before his family was imprisoned, but spent time in camp while visiting them. A principle of Hellmuth, Obata and Kassabaum (HOK), he designed the National Air and Space Museum at the Smithsonian and the Japanese American National Museum itself. All of the artists except Fujita have been featured in exhibitions at JANM.

Stated Ann Burroughs, JANM President and CEO, âI want to congratulate Akira Boch and his Watase Media Arts Center team for winning the Emmy. They captured the stories of these artists and designers in their documentary and helped to illuminate an important piece of American history that remains powerfully resonant today. I also want to thank KCET for making the production of Masters of Modern Design possible.â

KCETâs Artbound is an Emmy Award-winning arts and culture series that examines the lives, works and creative processes of arts and culture innovators making an impact in Southern California and beyond. Now in its 10th season, Artbound brings to light the regionâs rich cultural legacy and diversity. For more information or to watch Masters of Modern Design, go to kcet.org.