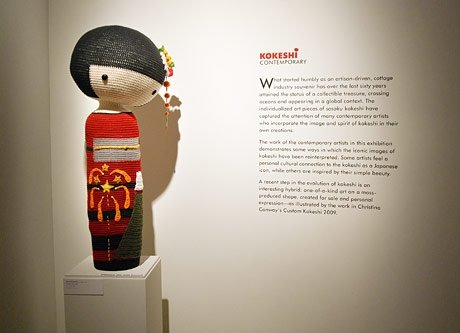 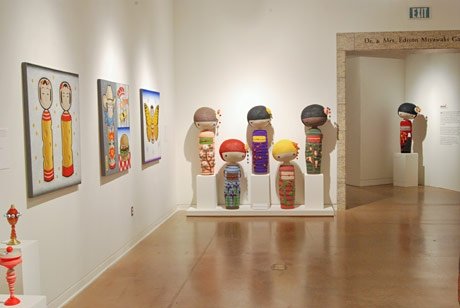 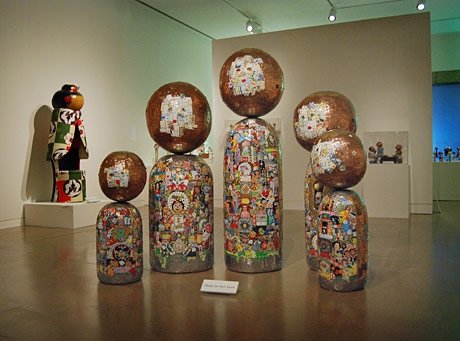 Marvel at the work of eleven contemporary artists whose works demonstrate some of the ways the iconic image of the kokeshi has been reinterpreted.

Nicole De Leon (Los Angeles, CA) De Leon has a personal passion for the art and design of Japan, and as a principal designer for Alexander Henry Fabrics, has incorporated many elements of Japanese designs into her textile patterns. As a collector of kokeshi, she was drawn to the diversity of kokeshi as a vehicle to create patterns with Japanese cultural appeal. Her kokeshi fabric has been made into clothing and accessories that have increased awareness and interest in kokeshi worldwide.

Alexandra Gjurasic (Albuquerque, NM) Rather than exploiting the similarities of mass-produced objects, Gjurasic emphasizes the variety and richness in multitude through her kokeshi inspired paintings and collages. Gjurasic’s mother grew up in Japan playing with, collecting, and coveting kokeshi dolls. For the artist the dolls became symbols of her inner world where fertility, conception, pregnancy, birth and transitioning into motherhood were all themes within her work.

Margaret Kasahara (Colorado Springs, CO) A nisei born in New York City and raised in Boulder, Colorado, Kasahara has been using kokeshi in her work off and on since 2002. Kokeshi have significance as representative of self-portraiture or as a stand-in for Japanese or Asian women in general. Her paintings are explorations of identity, combining memory, autobiographical experiences, and observations into personal and contemporary contexts.

Sachiho Hino Lee (Los Angeles, CA) As a designer for the clothing and accessory line Spicy Brown, Hino created a signature line of kokeshi designs for t-shirts and bags. Her choice of kokeshi as a character marries her cultural background with her experience as a designer for Sanrio. Her graphic treatment approach to kokeshi is multi-cultural and has created a global appeal for kokeshi.

Emi Motokawa (Los Angeles, CA) In the spirit of kokeshi artisans of the past, Motokawa started a mass-produced line of kokeshi. Her line of “Krokeshi” (crocheted kokeshi) contrasts the simple wooden icon with the softness of a stuffed toy. Her natural artistic instincts led her to explore her own take on kokeshi by playing with scale.

Joji Okazaki (Los Angeles, CA) Okazaki, originally from Kanagawa, Japan, but working as an artist and designer in the U.S. since 1993, is the maker of Lounge Family art toys. Okazaki, a former magazine designer and illustrator, conceived of his Swing Heads characters when he noticed a lack of kokeshi in modern American and Japanese homes. In his recent work he has created characters using lathe-turned wood echoing kokeshi manufactured of old, but his painting and use of color is pure 21st century art toy genre.

David and Kazumi Kobayashi Svenson (Wrightwood, CA) Although David is best known for his work in glass and neon, he also has deep roots in the tradition of wood sculpture. His father is a recognized Claremont woodcarver, and since 1969, David has worked at Alaskan Indian Arts where he teaches woodcarving techniques of the Tlingit tradition. He has always had an interest in the classic form of kokeshi dolls, but made his first kokeshi out of glass, using turning techniques that echo the lathe work of traditional kokeshi artisans.

Kazumi Kobayashi Svenson is from Sendai, Japan, and shares David’s love of kokeshi. Kazumi, a neon artist and teacher, has been using lampwork techniques to produce colorful kokeshi jewelry. In addition to their careers as artists, the Svensons are also collectors of traditional kokeshi.

Phoebe Washer (Petaluma, CA) The youngest of these artists began creating her own brand of contemporary kokeshi, combining her painting style with objects that she grew up admiring in a family friend’s Japanese art collection. Washer created around thirty art kokeshi before her untimely death in 2008 at the young age of 20. Washer shared her exploration of kokeshi by mentoring a young child in kokeshi-making. That child has continued to make kokeshi independently and recently had her own show at a local gallery in Northern California—a sign that an interest in kokeshi-making continues to capture a new generation.

James Watts (San Diego, CA) A self-taught artist raised in National City, CA, his family was the only Japanese household in a Hispanic neighborhood where the Japanese Christian Church provided their only source of Japanese culture. Watts creates paintings and sculptures that emphasize the retelling of stories and myths from around the world. His kokeshi series started in 1995 as an homage to his Japanese mother with his first kokeshi representing his family of brothers and sisters. For this exhibition he has created kokeshi representing his children. His figures are a mixture of images and color that represent influences of multiple cultures on his family.

Kathy Yoshihara (San Gabriel, CA) A mixed media artist with a background in graphic design, Yoshihara studied painting, sculpture, graphic arts at the University of California, Los Angeles. A large, chance purchase of gourds inspired her to incorporate them into her ceramic work. The gourds suggested heads and the resulting kokeshi were a natural reflection of Yoshihara’s own cultural heritage.