Issei (first generation Japanese American) “picture bride” Toku Shimomura began a diary in 1912, the year of her immigration to the United States, and continued writing until her death in 1963.

Her poignant observations, which chart her and her family’s experiences during the World War II incarceration in Puyallup, Washington and Minidoka, Idaho have inspired this series of paintings and prints created by her grandson Roger Shimomura, painter and University of Kansas professor.

Manzanar, one of the ten War Relocation Authority concentration camps, has been the subject of multiple interpretations over the last fifty years. Culled from the permanent collection of the Japanese American National Museum, this exhibition also features work by Ansel Adams, Robert Hasuike, and Masumi Hayashi.

New additions to this exhibition include the recent acquisition of American Families, a weaving by Nisei artist Momo Nagano, which is a tribute to nearly 200 Japanese American friends and neighbors who were relocated from their 30th Street neighborhood in Los Angeles. Woven into this poignant work of art are the family names of those impacted by the evacuation of their Los Angeles neighborhood. 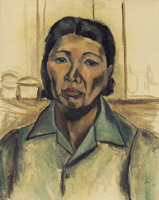 In May 1942, Issei artist Hisako Hibi (1907–1991) and her family were sent to U.S. concentration camps along with over 120,000 other Japanese Americans. An active artist in the Bay Area, Hibi continued to paint during her three years in the Topaz, Utah concentration camp. Her World War II incarceration paintings miraculously survived several decades, including a move to New York City and then to San Francisco.

This exhibition of selected paintings by this important artist sheds light on her early career and this crucial historical period. 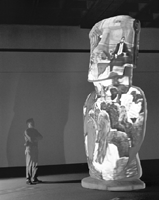 The first comprehensive exhibition of their career, it includes a newly commissioned piece, Silicon Valley, which combines dramatic projection of archival film footage of the atomic bomb blast, television commercials, and clips from Hollywood movies. 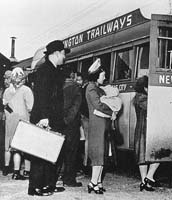 Though the end of the war brought “freedom” from the confines of America’s concentration camps, Japanese Americans came home to face obstacles in housing, employment, and discrimination.

In addition to outlining some of the varied challenges facing Japanese American resettlers, this exhibit will explore the process of rebuilding community as well as the individual struggle to come to terms with the larger “camp” experience.

Humanity Above Nation: The Impact of Manjiro and Heco on America and Japan
May 1 - August 2, 1998

This exhibit explores the lives and careers of two 19th century shipwrecked sailors from Japan who were among the first Japanese to be educated in America and who went on to help shape the relations between the two countries. 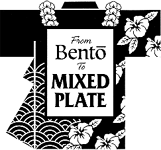 This exhibition traces the evolution of Japanese American identity in multicultural Hawai‘i as seen through the eyes of the first generation to the present.

Americans of Japanese ancestry (AJAs) share their story through the use of personal artifacts, family photographs, and first-person accounts. Told from an AJA perspective the uniqueness of the Island culture is evident and is truly a story involving all of Hawai‘i’s people. 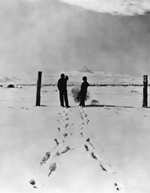 In January 1943, photographers Hansel Mieth and her husband Otto Hagel were sent on assignment by Life Magazine to photograph the Heart Mountain Relocation Center in northwest Wyoming.

Although they were well known for their sensitive portrayal of migrant farm workers in the 1930s, their Heart Mountain photos went unpublished and remained hidden until 1995, when their photos were displayed at San Francisco’s Vision Gallery. This traveling exhibition organized by former Heart Mountain inmate Mamoru Inouye includes photographs by Mieth and Hagel.

This is the third year of Finding Family Stories, an Arts Partnership Project initiated by the Japanese American National Museum in 1995 to create a dialogue among the diverse communities that shape the state of California.

This exhibition features the art of American artists of Japanese, Chinese, and Korean descent who employ traditional Asian art techniques and philosophies to explore abstract art. Isamu Noguchi, George Tsutakawa, Chinyee, and Don Ahn are among the 50 artists included.