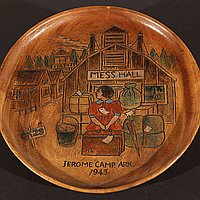 LOS ANGELES â The Japanese American National Museum (JANM) has added 240 oil paintings and more than 200 watercolors by artist Henry Sugimoto to its permanent collection, thanks to a donation by the artistâs daughter Madeleine. The donation also included diaries, woodblocks and woodblock prints, artist tools, and dress designs. These items join numerous other Sugimoto paintings and artifacts that had previously been gifted or loaned to the museum. JANMâs collection now encompasses over 700 works of art by Sugimoto, spanning his entire career. This is the largest collection of paintings in the JANM collection.

âThe Japanese American National Museum is honored to be the permanent home for Henry Sugimotoâs collection,â said Dr. Greg Kimura, President and CEO of JANM. âThe collection spans his entire career, from pre-War to his incarceration to the post-War era. Henry was a lauded artist before being unjustly locked up with 120,000 other Japanese Americans behind the barbed wire of an American concentration camp. That experience dramatically affected his work. Now JANM will be able to share his art and legacy for generations to come.â

âIt is important to me that my fatherâs work be properly cared for and made accessible,â said Madeleine Sugimoto. âI could think of no better place than the Japanese American National Museum to steward the art and artifacts of his career and life.â

The first gift of Sugimotoâs work was made to JANM by Madeleine Sugimoto and Naomi Tagawa in 1992. It consisted primarily of 142 oil paintings. In 2000, Madeleine Sugimoto loaned the museum additional paintings, sketchbooks, woodblock prints, letters, and other items. That loan has now been converted to a donation. In 2001, JANM presented Henry Sugimoto: Painting an American Experience. It was the first museum retrospective of the artistâs work and featured over 100 paintings along with photographs, sketchbooks, and other archival materials related to Sugimotoâs life and career.

Prior to WWII, Sugimotoâs career was thriving. Influenced by French Post-Impressionists, he primarily painted landscapes and city scenes. Mexican muralists such as Jose Clemente Orozco and Diego Rivera were also among Sugimotoâs influences, as were European and Japanese artists he encountered during a two-year stay in Paris. But once he was incarcerated in the wake of the bombing of Pearl Harbor, both his style and subject matter were forever altered. During and following the war, Sugimoto depicted the indignities he and his fellow inmates suffered in a narrative and figurative style that was unique to the artist. Sugimoto died in 1990 at the age of 90.

The recently-acquired items are still in the process of being inventoried. Once that process is completed, qualified scholars will be able to request access to selected items by appointment.