ON THE PASSING OF FRANK HAJIME WATASE 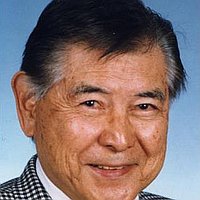 In my capacity as the Chairman of the Board of Trustees of the Japanese American National Museum, I wanted to convey our condolences and deepest sympathies to the family of Frank Hajime Watase at his recent passing earlier this month at the age of 96.

Frank was among the first Trustees for JANM before our public opening in 1992 and served as a Governor twice. Frank believed in our mission to preserve and share the Japanese American story with each new generation. Worried that the Japanese American World War II experience would be forgotten, Frank generously donated $1 million to JANM to purchase video equipment and to create an endowed fund that established the Frank H. Watase Media Arts Center in 1999.

As Frank had envisioned, the Watase Media Arts Center has produced a series of award-winning documentaries, supporting video presentations for JANMâs exhibitions and programs and now online content. Just recently, the Watase Media Arts Center produced Masters of Modern Design: The Art of the Japanese American Experience which won a local Emmy Award for best documentary.

A Hawaii-boy at heart, Frank was born in a small fishing village on Kauai to Karoku and Hiwa Watase where he grew up working on the sugar cane plantations. His grandmother used her savings so he could attend the Mid-Pacific Institute, a college preparatory school. His college education, first at the University of Hawaii, and later at the Harvard Business School, were interrupted by his military service during World War II and the Korean War, but as in everything he did, Frank persisted and earned his business degrees.

While Frank operated other food industry businesses, he always found time to give back. He once observed, âWhen you grow up in a Japanese community, certain ideals are embedded, such as the idea of trying to help each other to make life better.â Besides JANM, he supported all of his old schools in Hawaii as well as the Japanese American Cultural and Community Center (JACCC), the Japanese Cultural Center of Hawaii, and numerous civic organizations. In 2004, he was recognized by the University of Hawaii with the Distinguished Alumni Award. Others who received this honor before Frank included U.S. Senator Daniel Inouye, Congresswoman Patsy Mink and Margaret Oda, who served as JANM's Chair of the Board of Trustees.

Frank is predeceased by his first wife Dorothy, but survived by his wife of 20 years Janne; his children and their spouses Steve and Alison Watase, Suzy Roberts and her fiance Tom, Lincoln and Sylvia Watase, and Amanda and Blake OâDowd, and his grandchildren Danny, Coco, Mike, Delaney, Jake, Michael, Sophie, Luke and Mackenzie. He is also survived by his brothers Mark, Richard and Eddie.

In 2018 at the age of 94, Frank organized a family reunion at JANM because he wanted his grandchildren to learn about their own family history. He especially wanted them to learn about âthe heroism of the 100th/442nd Regimental Combat Teamâ because âit is a story every American should be proud of.â

My personal remembrances of Frank include his outgoing, energetic personality and his constant pursuit of new ideas, all the qualities that made him a successful entrepreneur. His philanthropic contributions to JANM and educational institutions in Hawaii were significant and impactful. We are grateful for his generosity and we will miss Frank.