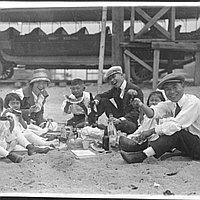 The organizers believe that nothing says âhomeâ like familiar tastes. Throughout time and the Nikkei diaspora, immigrants have learned how to bring the flavors of home to the table through ingenuity and tenacity. In this interactive program, participants can learn how early immigrant communities adapted traditional Japanese cooking in these new environments.

âThis series promises to be an interesting glimpse into the history of Japanese Americans and their relationship with Japan as viewed through the lens of a shared food culture,â stated Consul General of Japan in Los Angeles Akira Muto. âEven in times of great deprivation and hardship, and often without many important ingredients, maintaining food traditions remained at the center of Japanese American life. We are delighted to support this unique exploration of the Japanese American experience and the vital role that food plays in bringing our people together, and to share this fascinating story with all Americans.â

The âBuilding the Flavors of Japanese Americaâ program will feature foodways scholar Valerie Matsumoto, who will explain items from JANM's Collection as well as early Japanese American food history and how food trends have evolved into the present. JANM Director of Collections Management and Access (CMA) Kristen Hayashi will share objects from the archives that highlight the ability of Japanese Americans to adapt and remain resilient through the foods they made while subject to racial bias and discrimination. Cookbook author and designer Azusa Oda will demonstrate how to cook the staples of Japanese American dishes. Oda is the author of the book, âJapanese Cookbook for Beginners: Classic and Modern Recipes Made Easy. â

The series will continue in December with a program on Japanese American holiday food and will conclude in January of 2021 with a presentation of Japanese American restaurant food and dining. Each 90-minute presentation will include instructional videos, hands-on interactive food preparation food workshops and historical and archival content from JANM's Collection.

âJANM is delighted to begin this programmatic partnership with the Consulate General of Japan in Los Angeles,â stated Ann Burroughs, JANM President and CEO. âFood is a wonderful vehicle to help understand history, traditions and culture. While the Japanese American community has always observed food traditions during holidays like Oshogatsu or New Yearâs, the history is often not well known. This partnership with Consulate General is important for JANM and the Japanese American community to help strengthen our ties with Japan.â

Established in 1985, JANM promotes understanding and appreciation of Americaâs ethnic and cultural diversity by sharing the Japanese American experience. Located in the historic Little Tokyo district of downtown Los Angeles, JANM is a hybrid institution that straddles traditional museum categories and strives to provide a voice for Japanese Americans as well as a forum that enables all people to explore their own heritage and culture. Since opening to the public in 1992, JANM has presented over 70 exhibitions onsite while traveling 17 exhibits to venues such as the Smithsonian Institution and the Ellis Island Museum in the United States, and to several leading cultural museums in Japan and South America. For more information, visit janm.org or follow us on social media @jamuseum.