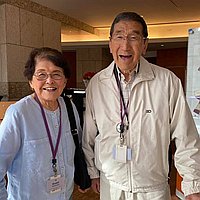 I am personally saddened to share the loss of Richard âBabeâ Karasawa, a JANM volunteer for over 30 years, who passed away on December 8, 2020.

Babe and his wife Mary were fixtures at JANM, becoming volunteers in 1989 before the opening of the Historic Building in 1992. As with so many of our core volunteers, the Karasawas embraced the challenge of sharing the Japanese American experience with visitors and school tours. Babe was a tour and gallery docent, who served as an example to other docents.

As a docent, Babeâs easy-going and affable personality made him a gallery favorite. But his own personal story, in which he and his family and thousands of innocent Japanese Americans were forcibly removed from their homes and incarcerated in concentration camps during World War II, once made him âfeel like a rejected American.â

In contrast, the success of the Japanese American redress campaign in 1988, where the government apologized for its illegal actions, was, by Babeâs account, âthe happiest day of my life.â His goal was to ensure that what happened to Japanese Americans would never happen to another group of Americans.

Born in San Diego, Babe and his family were imprisoned in the Poston camp in Arizona during the war. When JANM organized an exhibition based on San Diego librarian Clara Breed, who maintained ties with many Japanese American students in Poston through letters and postcards, Babe volunteered to help JANM's Collections staff organize Miss Breedâs letters. Babe even discovered one of the young letter writers was a childhood friend.

Babe was recognized for his work with a JANM Program Award, a Family Spirit Award with Mary and the 2005 Miki Tanimura Outstanding Volunteer Award, the highest honor for a volunteer. He and Mary were presented their 30-year volunteer service pins in 2019. Even in his final days, according to Babe's daughter, he asked to go to JANM, but unfortunately, the COVID-19 situation prevented that.

On behalf of the JANM leadership, staff and volunteer corps, I extend our deepest sympathies and our sincerest gratitude to Mary and the Karasawa family at the passing of Babe. His spirit will always be part of JANM.