The first retrospective exhibition of paintings by Henry Sugimoto (1900-1990) will open on March 24, 2001 at the Japanese American National Museum in the heart of the Little Tokyo Historic District in Los Angeles. Henry Sugimoto: Painting an American Experience is a survey of Sugimoto’s paintings as well as an examination of the Japanese American experience as seen through the work of an artist whose life and art were transformed by his incarceration in an American concentration camp during World War II.

Over 100 works of art spanning Sugimoto’s long career will be exhibited along with photographs, sketchbooks, and other archival materials. In keeping with the Museum’s commitment to an interdisciplinary approach, the exhibition links history, culture, and the arts together, and is enhanced by multimedia and interactive components. The Museum will also offer a variety of lectures, art talks, workshops, and family events based on themes addressed in the exhibition.

Although his work has appeared in high profile exhibitions in recent years, Henry Sugimoto: Painting an American Experience is the first retrospective of his work. The exhibition chronicles Sugimoto’s life’s work, and examines the profound differences between the two defining periods of Sugimoto’s career: before World War II, when his career was thriving, and after his incarceration in a concentration camp, which effectively extinguished his promising career and radically changed his life and his art.

In the early years, Sugimoto primarily painted idyllic landscapes and city scenes, choosing as subjects iconic California sites such as Yosemite and the Carmel coast and famous monuments in Paris, France. Works from the first half of his career such as Half Dome of Yosemite and Notre Dame Cathedral were influenced by the French Post Impressionists. Later he drew inspiration from Mexican muralists Jose Clemente Orozco and Diego Rivera. The vibrant colors and bold, confident lines of Sugimoto’s work in this period are the product of multiple artistic and cultural influences, acquired in part during a two-year stay in Paris, where he met and was influenced both by European artists as well as by Japanese artists living abroad.

Once incarcerated, Sugimoto took a profound turn in the themes and style of his paintings, abandoning his beautiful landscapes in favor of depicting the indignities he and his fellow inmates suffered during the war. Incarceration led Sugimoto to feel more a part of the Japanese American community, and inspired him to document his experience and that of other inmates in the camps. Unlike his early works, the paintings of that period are narrative and figurative, often tackling complex stories and themes.

In his poignant When Can We Go Home? Sugimoto painted his wife and daughter on their first day at the Fresno Assembly Center—the title derived from the question his daughter asked that day after what she thought was a picnic lunch. Another evocative work from that time is Evacuation (One Dollar for a Nice Icebox) which addresses ideals of American domestic comfort in the context of Japanese Americans being forced to sell off their belongings at a cut rate before being taken to the camps.

While the war and the anti-Japanese sentiments that it spawned essentially ended his successful career, the experience transformed Sugimoto’s art, and led him to produce a profound series of works while he was incarcerated. Those tragic circumstances inspired the development of a unique style that was to define his work for the rest of his life. And while it would have been reasonable for Sugimoto to spurn his adopted homeland after being unconstitutionally incarcerated there for over three years, the experience instead strengthened his belief in the ideals upon which America was built. When the government allowed Japanese immigrants to become citizens in 1952, Sugimoto immediately applied for naturalization.

For Sugimoto, it was at the very moment when his civil liberties and freedom of expression were curtailed that he came to truly understand the value of those ideals and became determined to address them in his art.

Exhibition Publication
A companion volume to the exhibition is being published by Heyday Books. The book, Henry Sugimoto: Painting an American Experience will include 60 full-color reproductions of Sugimoto’s paintings as well as extensive documentation of the painter’s sketches, writing, letters, and exhibition announcements, as well as photographs.

Written by Associate Curator Kristine Kim, with an Introduction by Senior Curator of Art Karin Higa, and a forward by Smithsonian Institution Secretary Lawrence M. Small, the book also includes extensive excerpts from Sugimoto’s memoirs, translated from the original Japanese by Emily Anderson. A moving epilogue by daughter Madeleine Sugimoto concludes this volume.

Media Arts Component
In conjunction with the exhibition, a documentary on the life and work of Henry Sugimoto has been produced by the award-winning Media Arts Center of the National Museum under the direction of Karen Ishizuka and Robert A. Nakamura. Harsh Canvas: The Art and Life of Henry Sugimoto, directed by Media Arts Specialist John Esaki, is a moving tribute to Sugimoto crafted from his memoirs, still photographs, rare home movie footage of him painting at the Jerome, Arkansas concentration camp during the war, and footage taken in his studio in New York in the 1980s. The film will be screened daily at regular intervals in the Museum Terasaki Orientation Theatre for the entire run of the exhibition.

For additional information on the exhibition, visitors to the Museum can refer to the Hirasaki National Resource Center in the Pavilion.

Henry Sugimoto: Painting an American Experience opens to the public on March 24, 2001 at the Japanese American National Museum. The Museum is located at 369 East First Street in the historic Little Tokyo section of Los Angeles. For more information about this exhibition, call 213.625.0414. Museum hours are Sunday, Tuesday, Wednesday, Friday, and Saturday: 10 a.m. to 5 p.m. and Thursday 10 a.m. to 8 p.m. Museum Admission is $6 for adults; $5 for seniors, and $3 for students and children. Admission is Free for Museum members and children under 5. Metered street parking and public parking lots are conveniently located near the Museum for a nominal fee.

Discover the Art of Monoprinting: Workshop for Adults
Saturday April 7 and Saturday May 5, 2001
Artist Henry Sugimoto experimented with a variety of different techniques in his long career. Miles Hamada, Director of the Little Tokyo Art Workshop, is an expert in the area of Monoprint techniques. Hamada, who maintains his studio in the Artist District of Downtown Los Angeles, will provide participants with a hands-on experience in creating Monoprints.

2nd Sunday Program: Celebrating Father’s Day
Sunday, June 10, 2001
Families are invited to take part in a special arts and crafts program where children will be able to create their own presents for their fathers. The workshops are part of the Japanese American National Museum’s 2nd Sunday series, designed to make art and history more accessible to people of all ages.

Art Talk: “Understanding My Father’s Artistic Drive” with Madeleine Sugimoto
Saturday, June 18, 2001
Hirasaki Theater Gallery
Henry Sugimoto’s daughter Madeleine will speak on the subject of her father and his devotion to his art, despite numerous obstacles. Ms. Sugimoto was a young girl when the U.S. government forced her family to live in an American concentration camp in Arkansas. Her father then moved the family to Harlem in New York City after World War II. Ms. Sugimoto became the caretaker of her father’s extensive body of work with over 200 of his paintings donated to the Japanese American National Museum. Exhibition Curator Kristine Kim will conduct the talk with Ms. Sugimoto.

Courtyard Kids Festival
Sunday, August 5, 2001
In the Japanese American National Museum’s largest gathering of families, the Courtyard Kids Festival hosts a number of hands-on arts and crafts workshops, demonstrations, and cultural performances. In conjunction with Henry Sugimoto: Painting an American Experience, art will be highlighted at this year’s Festival.

Workshop for Adults: Making Bird Pins
Saturday, August 25, 2001
Artist and educator Flora Ito will provide participants an opportunity to try a popular activity of Japanese Americans while imprisoned during World War II: carving bird pins. Independently, this activity was practiced in all 10 U.S. concentration camps. Learn how to carve and paint a bird pin.

Special Gallery Walkthroughs
Dates to be announced
Local community artists will lead participants through the gallery spaces of Henry Sugimoto: Painting an American Experience while providing their own perspectives on Sugimoto’s art. The series is geared to make art more understandable and enjoyable for visitors. 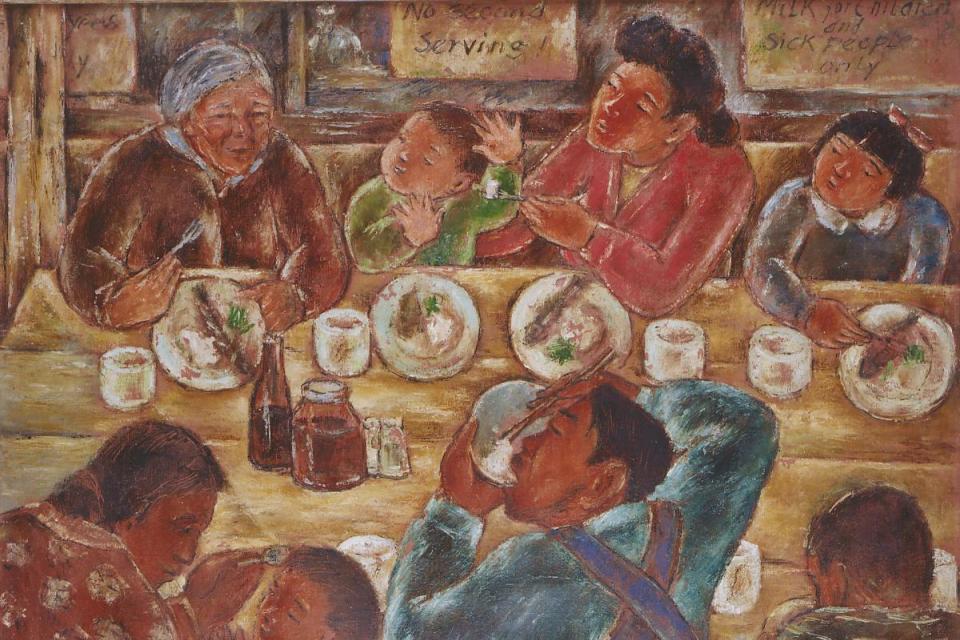 At the age of 19, Henry Sugimoto left Japan to make his life in America. Determined to become an artist, he studied in the San Francisco Bay Area and exhibited nationally and internationally.When he…