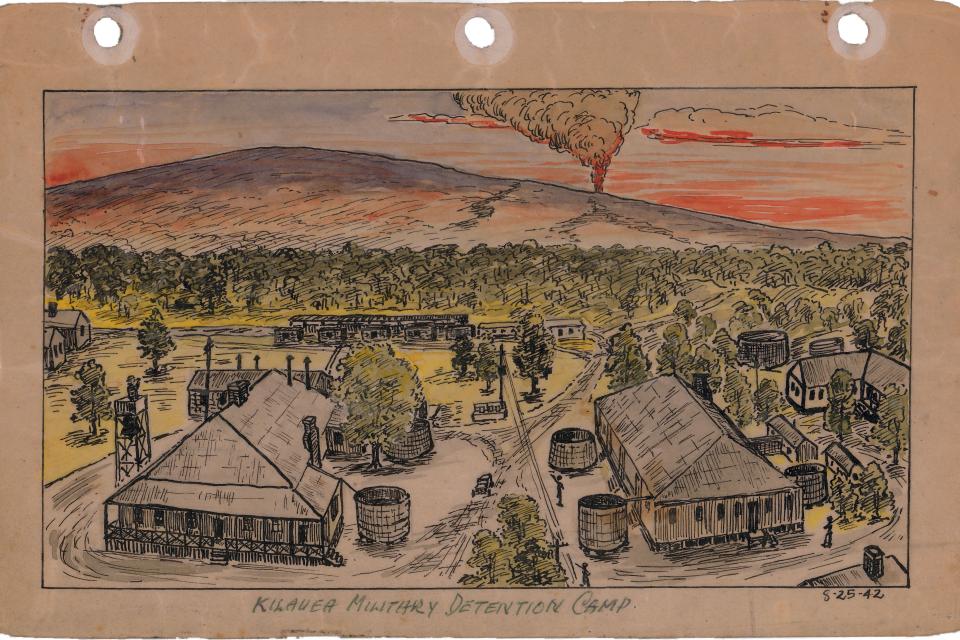 (96.117)(97.106) The online collection of George Hoshida (1907-1985) includes 260 drawings and watercolors drawn from his visual diary covering his incarceration for the duration of World War II in the Kilauea Military Camp and Sand Island in Hawai'i, in Justice Department internment camps at Lordsburg and Santa Fe, New Mexico, and in WRA camps in Jerome, Arkansas and Gila River, Arizona.

George Hoshida was born in 1907 in Kumamoto, Japan. He migrated with his family to Hilo, Hawaii when he was four years old, and this is where Hoshida spent all of his childhood and adolescent years. He was involved with his Buddhist temple and with Judo, two things that would later cause him to be considered "potentially dangerous." Due to a mixture of World War II, of the bombing of Pearl Harbor and of Hoshida's "potentially dangerous" status, he was forcefully removed from his home and family and placed at Kilauea Military Camp in Hawaii.

Throughout his time away from his family, Hoshida and his wife, Tamae, wrote letters to each other almost everyday. Hoshida kept busy by sketching, drawing, and painting pictures of his journey and observations. His pictures give us an idea of what the Justice Department camps were like, and of what the mainland concentration camps were like.

The Life and Work of George Hoshida Exhibition

Items in this collection were featured in the exhibition The Life and Work of George Hoshida: A Japanese American's Journey, which was on display at JANM January 01 - May 01, 1997.