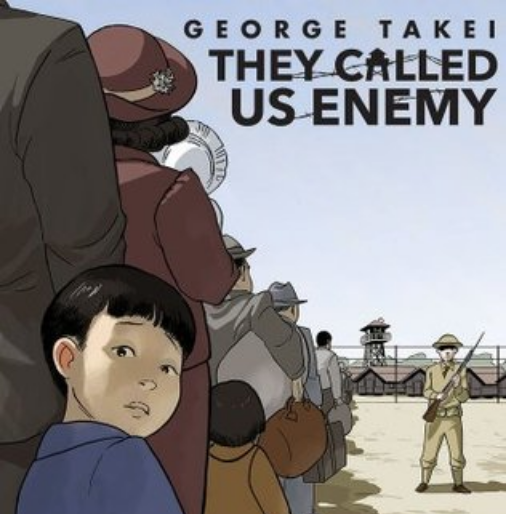 Los Angeles, CA – The Japanese American National Museum (JANM) extends its heartfelt congratulations to its Trustee, Chair Emeritus and founding member, George Takei, whose graphic novel, They Called Us Enemy, has been recognized with a 2020 American Book Award by the Before Columbus Foundation.

Takei collaborated with writers Justin Eisinger and Steven Scott and artist/illustrator Harmony Becker to create the graphic novel which depicts his family’s World War II experiences when they were unlawfully forced from their home and imprisoned in U.S. government-run concentration camps. Takei was only four years old when he and his family were subjected to racist hysteria simply because they looked like the enemy.

They Called Us Enemy also highlights Takei’s mother's hard choices and his father’s remarkable faith in American democracy, both of which influenced George’s life as a fearless civil rights leader, accomplished actor and social media icon. His long-time support for JANM as a Trustee and donor stem from his family’s experiences during the war and his commitment to ensuring that this epic failure of due process not be forgotten or repeated.

“JANM is delighted that George Takei's graphic novel, They Called Us Enemy, is receiving well-deserved recognition with the 2020 American Book Award,” stated Ann Burroughs, JANM President and CEO. “George has worked tirelessly to ensure that the Japanese American World War II history is preserved and that its lessons and experiences are taught to each new generation. His Broadway musical, Allegiance, and this graphic novel are just two examples of his efforts to embed this important story into popular culture and to ensure that the tragic lessons of history shine a light on the present and help to shape a just future.”

They Called Us Enemy is available for purchase through the JANM Store. Go to janmstore.com to see it and other merchandise in its 2020-2021 Store Catalog.

The American Book Awards were created to provide recognition for outstanding literary achievement from the entire spectrum of America’s diverse literary community. The purpose of the awards is to recognize literary excellence without limitations or restrictions. The award winners range from well-known and established writers to under-recognized authors and first works. The awards are not bestowed by an industry organization, but rather are a writers’ award given by other writers. For more information on the Before Columbus Foundation, go to beforecolumbusfoundation.com.